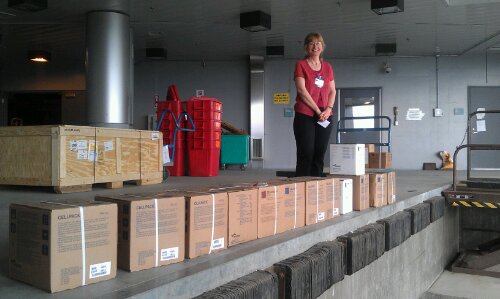 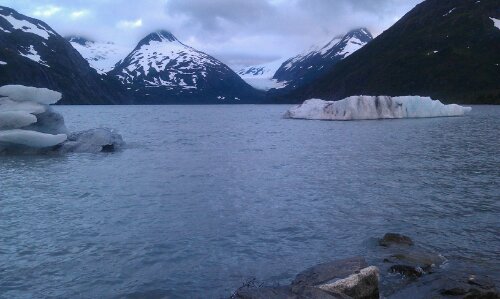 Decided to rent a car for the next couple of days and ended up getting an upgrade to a crew cab GMC Canyon – since I’m flying out early on Sunday morning for Inchon, thought I might do some sightseeing in the area.  After talking with Beth, Sharlane & Kim at Alaska Scientific about some options, I decided to head south to the port city Homer.  Since I was heading that way, I asked if they needed any products delivered and there was a large order for lab reagents for the hospital – what a great opportunity!

Loaded and on my way with 500+ lbs of liquid reagents, I started south for about 220 miles to South Peninsula Hospital in Homer to meet the laboratory director, Laura Miller and make the delivery – just can’t beat the same day service!  After a brief tour of the lab and a photo op, I toured the city and drove out on the Homer Spit which protrudes out into the bay for some quick pics.

On my way back to Anchorage, I could help notice all the people fishing for salmon along both the Kenai and Russian Rivers – apparently the Sockeye salmon run is winding down, but KIng’s, Chum’s or Pink’s are on the rise.  Had a pulled pork sandwich at Sackett’s near Cooper Landing and met a fishery expert from Washington State – he filled me in on all fishing activities.

Got a beautiful late-day shot of Kenai Lake and note the float plane in the distance – there are thousands of them throughout Alaska and you see them on just about any waterway; they are the only mode of transporation in many parts of Alaska.  From there I turned off at Portage Glacier and was honestly a bit disturbed by how much the glacier had melted and receded since I was last there in the late 70’s…back then the face of the glacier was just beyond the ice floating in the foreground – you can see the glacier way off in the distance.  Still can remember an Arab man from a tour bus waving the bus driver to wait as he filmed a small chunk of ice floating in the lake; he kept pushing and filming the ice for the folks back home to see and have to believe he was amazed that ice even existed outside in a natural state!  My mom has a picture taken of the fella and I’ll have to make a trip over to North Carolina soon to check it out…

Kim recommended that I stop by the Double Musky in Girdwood for a drink & some dinner – apparently the late senator from Alaska, Ted Stevens, frequented the spot; he actually nominated me for West Point & still have his telegram he sent.

Since it was getting late, I just had the halibut ceviche appetizer and it was terrific along with a couple of my favorite beverages – a very cool spot with a lot of history.  The town of Girdwood is at the base of Alyeska Ski Resort and I drove up to check it out – a moderate size mountain with some pretty agressive terrain.

A long, but very rewarding day to see some of the old sights I had not seen in almost 40 years with my family…were the best of times!