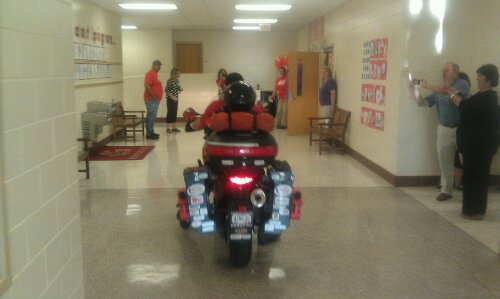 Did I say, “WOW!”…what a truly incredible day starting off with my sister, Portland, arranging a Rally 4 Quarters for Research funding raising event at her school in Cleveland County, NC – Springmore Elementary. The only detail I was given was to meet her husband Bert at 7:50 am so he could show us the way to the school; had my Mom, brother Tye and Aunt Camey following to be a part of the event.

As we approached the school it was one of those typical school morning sights with kids being dropped off by their parents and buses of eager kids unloading. Within minutes I was asked to ride my bike through a door leading into a hallway…believe my Dad once did the same thing back in high school but under much different circumstances – sure there were some very unhappy teachers and school administrators on that day!

But this was different as I approached the school’s gym filled with 700 screaming elementary kids and the Crest High School Marching Band playing their fight song…what a truly unbelievable sight! I parked the bike in front of all the kids and watched as a PowerPoint presentation of my journey was played for everyone. The school had a change drive over the last couple of weeks and I was presented with a check as their contribution to Rally Foundation…to me this is Rally at its best – a grassroots organization empowering everyone to join in their mission to help in the fight against childhood cancer.

The entire event was in honor of Rally Kid Seth who was unable to attend since he had just finished up his last round of chemo therapy and wasn’t quite feeling up to attending. However, Seth’s Mom Sharon, who teaches second grade at the school, and sister Gracie did come out to greet me. I gave Seth’s Mom a refrigerator magnet of Moscow I’d been carrying in my pocket since Siberia; it was a gift given to me by a Russian that had assisted me after my crash…couldn’t think of any better time to share that gift than at this moment with Seth…hang in there young man!

As I fired up the bike the marching band followed me out of the gym and down the hall…you couldn’t have scripted a more powerful event…what a homecoming this was becoming.

Said my goodbyes to the family and I was off to Atlanta stopping first to see my friends at MDSI…saw Scott & John and we chatted about stories from my journey – just a great time to catch up and to start getting my mind right on returning to work next week.

The folks at Rally arranged a small get together at a restaurant in Roswell complete with pom-poms and cheers…happy I got the opportunity to meet all the folks at Rally that helped to make my fundraising event the success it has become.

Later that evening I was joined by Shanon’s brother, Trent, who lives in Atlanta and Rick and his Dad JR who came down to ride my final leg back to Nashville. You may recall Rick rode to St. Louis with me on my first day of the ride and also accompanied me on my first hospital visit..so great to have Rick and his Dad along to complete this journey.