Up at 6am and prepared trip maps and gear for the trip to Irkutsk departing Chita at 8am only to get turned around trying to get out of the city onto the M55…Chita was extremely difficult to navigate within, but I finally got on the right track heading again on my westward journey.  While the first part of the day started off a bit cool, it quickly warmed as the sun rose in the sky.  Couldn’t help but notice the grand expanse of the region with small towns/villages scattering the landscape.  All the house looked similar of wood with colorful window treatments (teals, blues and the like) and fenced – gardens – women were often seen along the roadside dressed in very colorful dresses.

Today was was to bring a few roadside stops to make minor repairs…while bouncing along one of the gravel roads, I noticed the dash on the bike start to shake as if a mounting bracket was loose or broken.  After a brief inspection, I notice 2 mounting bolts had loosened – it took 2 attempts today to finally remedy the problem.  To add to my anxiety, the drive chain continues to be an issue getting loose and it went a step further as it began making a grinding noise.  If you recall, TSA took my canned chain lube and I was foreced to search for a replacement in Dong Hae – the only product even close was WD-40…I know, I know what was I thinking!  Hey, while standing in the aisle, I looked up the WD-40 website and found one of the 2000+ uses was as a motorcycle chain lube. Being an aircraft mechanic for many years, something kept telling me this made no sense, but hey, they published it.  I decided to use some 10-40 motor oil instead (recommended in the Suzuki shop manual as a chain lube) and it took care of the noise problem.

Tye, my brother, had just called me as I got back on the road to listen to my crazyiness as I described what had taken place…Tye keep up the weather forecast posts on FB – very helpful to me in my day planning.

I did notice one thing while moving more and more into the heart of Siberia – the heart and soul of the area was starting to come out – these rural villages and especially Ulan Ude which looks like one of the smaller villages on a much, much larger scale.  Just at the gas stop there, the young lady assisting with the fill up was very pleasant – I was just noticing a change in the people…something I started to embrace and get more comfortable.  Even during my last fuel stop outside of Irkutsk, an entire family hopped out of their van to pose for a picture with me…spoke no English, but we were able to communicate.

The day was littered with many road construction projects…gravel and dirt roads that often became very difficult to manage given the load and street tires on the bike.  That quickly turned to rain and mud the last 5 hours or so of my day with conditions getting even more treacherous – probably the closest I have come on the entire trip to losing control and the bike going down.

To help increase my speeds I did learn quickly to find a local that was running at a speed I was comfortable with and follow…it served a couple of purposes:  First, I ccan watch the movements of their vehicle for to help avoid pot holes and road dips or rollers.  Rollers have become my biggest challenge since they have caused my bike to bottom out a few times adding to my chain issue.  Secondly, I probably wouldn’t run at the speeds if I was alone to avoid any issues with local law enforcement…we call them rabbits in Tennessee and you probably do as well.

As I passed Lake Baikal, which incidently is the largest & deepest, fresh-water lake in the world making up 20% of the world’s unfrozen fresh water, I saw two cyclists on dual sport bikes like mine pass me as I was getting fuel only later to pass them farther up the road and waving.  As I was climbing the mountain about 75 miles outside of Irkutsk, they came up from behind to pass and for the next 75 miles I ran third the entire time – I wouldn’t have driven as agressively solo, but hey, to local rabbits and I’m gonna go.  Just outside Irkutsk, they pulled over and I decided to do the same and introduce myself.  Both were from Irkutsk speaking no English and had just completed the Irkutsk to Vladivostok round trip.  Asking them where my hotel was in my best Russian, the younger biker pointed to himself to follow…keep in mind, they had been on a 7-10 day trip and just returning home and he takes me directly to the hotel at 11pm at night!  We exchanged no names although we did pose for a picture together – these are the moments that make this trip so very special to me!

I was absolutely exhausted when I finally got to my hotel room – took a quick shower and crashed for the night.  Hotel staff there spoke English and I ordered soom room service – I has hongry!…a great ending to this long day. 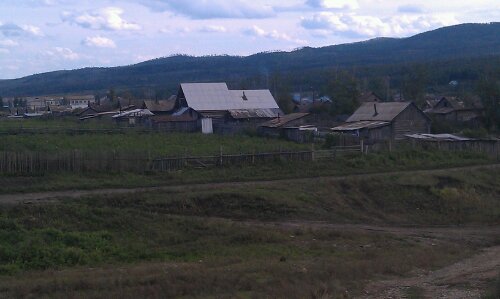 Weather Temperature in the first half of day in the mid 50’s with rain, clouds & fog. Mostly sunny skies in the afternoon with temps in the upper 60’s

Started stirring about 4:30 am and decided to rest a bit longer since it was raining…wanted to get back on the road at sunrise, which I did. The first half of the day was tough given cool temps, rain & fog, but the weather did break to make a great riding day.

Dealt with quite a few bumps in the road and areas under repair…I just wanted to make Chita before nightfall. Mistakenly, tried to pass a 1000 won Korean bill for 1000 rubles to pay for gas…needless to say the attendant just wasn’t very happy with me.

Take a look at the road signs in Russian…they show both Chita & Skovorodino – kind of cool.

Today marked my longest distance in one day for this trip and it allowed me to squeeze another day out of the schedule.

Terrain went from mountainous to huge open plains with cattle and farms….many small towns could be seen in the distance with most very simple of wood and metal roofs. It is obvious they were poor; however they were some of the nicest folks – I felt very comfortable in this rural region which seemed much like mid – America.

Rolled into Chita at 7 pm looking for the hotel booked with everyone I talked with sending me in a different direction. Finally talked with a man who spoke good English and he recommended a different spot and said the hotel I had planned to stay in was a bit rough. You can’t make this one up…It’s called the Panama City Hotel and at least it’s gated offering more security for the bike.