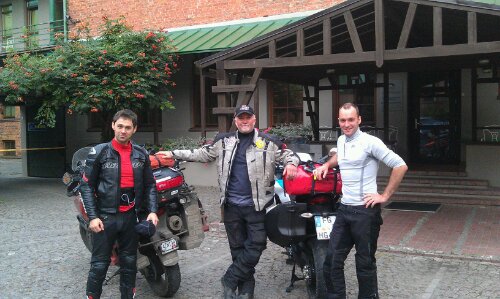 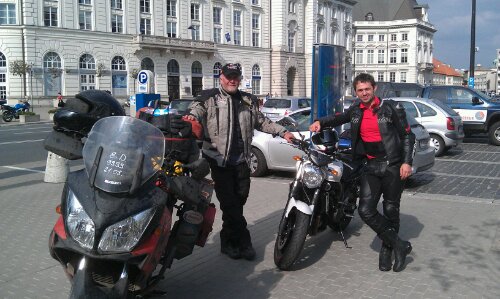 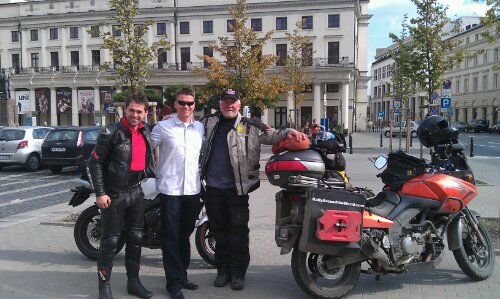 Weather Temperature mostly cloudy in the mid 60’s with a mix of sun & clouds with some brief rain showers especially late.

Truly was looking forward to this day since Piotr with HTL-Strefa had met me the evening before and for the first time during this long journery I had no responsibilities to plan the days route…Piotr was going to take the lead on the trip to Warsaw, Poland – the city he currently lives.  The first picture of the day is of Piotr (left) and Marty (right)…as you may recall we met Marty the evening before looking for the hotel and he’s on holiday in the region on his motorcycle…good luck Marty on the rest of your trip!

Riding conditons were excellent and Piotr started the day with more scenic and winding 2 lane roads…by excellent riding conditions I mean the weather and the actual road conditions.  Since I was delayed in Novosibirsk due to mechancical issues, this was to be a short visit to Warsaw unfortunately.  We arrived in Warsaw early afternoon and the plan was to have lunch in the city.  As we were parking our bikes, we were joined by Jarek Moleda who runs operations for HTL-Strefa in my part of the world out of Atlanta – what a truly wonderful surprise to see him – he typically visits the corporate office in Warsaw about 4 times each year and as luck would have it, he was able to join us for lunch.

I have known Jarek for several years and he always comes to visit with a gift…just about every leather good I have has been a gift from him – the wallet and even the business card carrier I currently carry have come smartly embossed with the HTL-Strefa logo.  Lunch was at a cool spot in the city cal the San Antonio and we chose  the patio area since the weather was so nice.  Jarek recommended the tomato seafood soup as a starter – kind of a light marinara sauce flavor with bufferfly shrimp, oysters, calamari and other spices – it’s great to back in the west!  My main course was a stuffed chicken with ham accompanied with potatoes and grilled zucchini…are you kididng me!

After saying our goodbyes, I was off alone to Berlin, Germany on the A2…I must say the section of that highway in Poland is some of the best in the world.  Speed limits are 140 kph or about 90 mph and the surface conditions are excellent.

Arrived in Berlin about 9 pm and stayed in a small boutique hotel recommended by Piotr…The Weinmeister Hotel – a very trendy spot located in the heart of the city.

I am excited about the ride tomorrow to Calais since I’m only a ferry ride across the English Channel to London marking the start of my final leg of Rally Around the World…I can hardly believe this day has now arrived!! 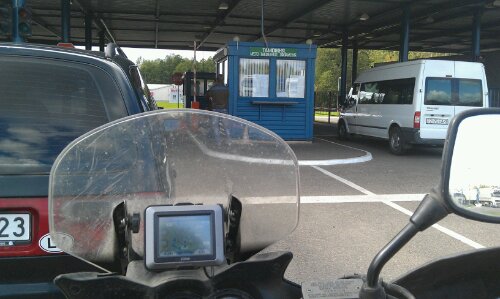 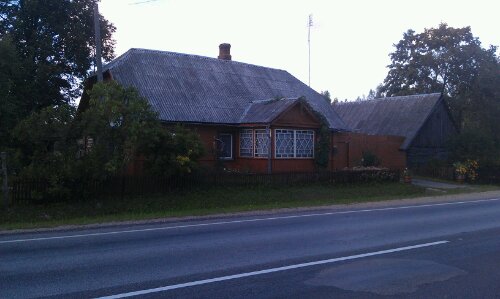 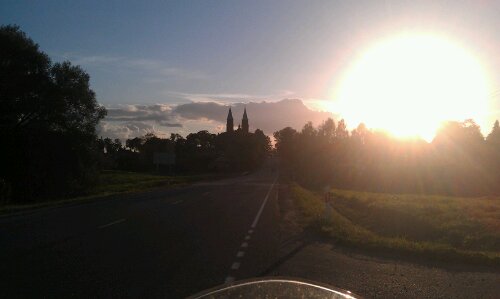 Weather Temperature mostly cloudy in the mid 60’s with a mix of sun & clouds with some brief rain showers especially early.

Well the big day had arrived!…on this day I was going to be riding towards the Latvian border and after a couple of long, tough weeks in Russia finally closing this chapter of the ride.  Quite honestly, the Siberian leg had always been the keystone of the entire trip – to me, the success or failure hinged on this 7000 mile ride across some of the most inhospital terrain and land on the planet…this was going to be a big day for me.

The first 4 hours of the ride was hampered by moderate rainfall making the roads a bit treacherous in spots, so I was forced to keep my speeds down.  As time approached late morning, I could see small breaks in the clouds finally ending up with mostly sunny skies as I approached the border.  As I rounded a corner, I could first see nothing but huge trucks, probably 150 or more stopped and lined up with many of the drivers standing outside…I thought to myself this just can’t be good.  As I worked my way to the front of the line, the line of cars was only about a dozen deep and I actually got to the Russian customs side in less than 30 minutes.  My excitment was quickly dashed when I was asked to move to another line and an older, more distinquished agent – he reminded me of George C. Scott, the actor that played Patton took over the process.

There appeared to be quite the confusion with my documents and I ended up with him for over an hour.  I finally got my stamp, stamp and stamp on some paperwork and was motioned to move to the Latvian side.  The experience was very similar with me being motioned to see this person and that – one said my International Driver’s License was invalid and that my Tennesse license did not allow for me to ride a motorcycle in Lativa – anyhow, I felt they were only hassling me a bit and decided to just go along with them – thought it was quite humorous frankly.  I truly believe they finally just got tired of me and finally after some more stamps, stamps and stamps I was on my way into Latvia.

Immediately I noticed a change in the landscape and road conditions…enough that it quickly became very apparent – the roads were much better maintained and the lushness of the farms was stark.  For the first time in several weeks I began to feel a calmness in the air that helped me to relax as I rolled through the countryside.

Earlier in the day I had been in contact with Piotr Mlodecki, business development with HTL-Strefa, and one of NDC’s vendors out of Poland…I had actually met Piotr in Nashville at a brief meeting and we discussed the possibility of riding together during my trip.  That moment had arrived and just having the opportunty for the first time in 40 days to ride with someone I knew was exciting.  Piotr made reservations at a hotel in city center of Kaunas and we planned to meet around 10 pm for drinks and dinner.  As luck would have it, Piotr met and guy on a bike looking for a place to stay for the night and he ended up joining us for dinner – his name is Martin from Germany and we had great converation about riding experiences and all the spots to see in the region…a very nice closure to an already wonderful day!  I was truly able to finally put a check in the box…Siberian Leg – 7000 miles!!