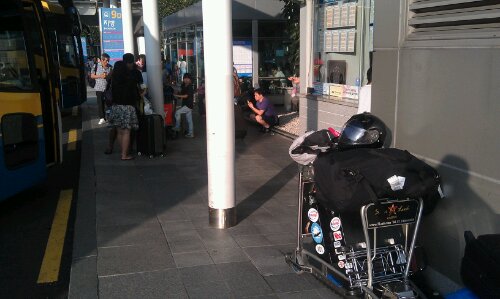 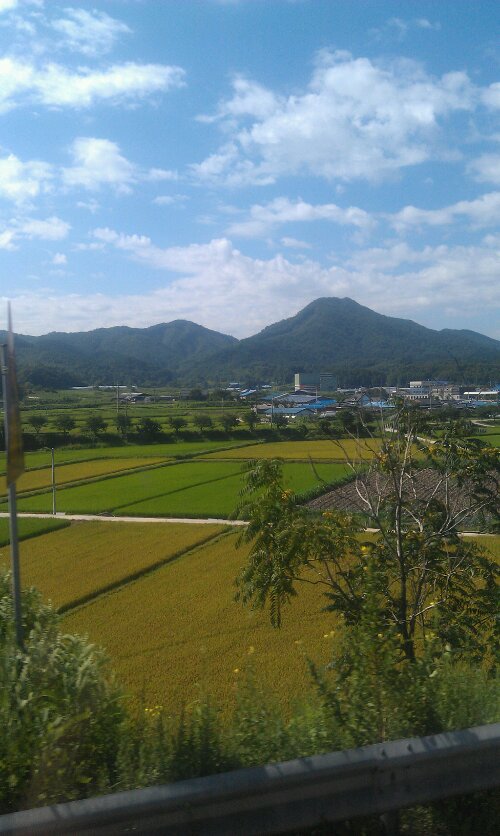 Weather  Temps in the lower 80’s with mostly sunny skies

Woke this morning at 3:30 am local time with a plan of taking a taxi over to the airport without my gear to check on options getting to Dong Hae on the eastern coast of Korea.  Melissa Smith provided me with a couple of suggestions with one being a rental car with a driver; however, after talking with the hostess at the hotel, she mentioned I could get to Gangreung by an express bus putting me about 50k north of Dong Hae.  With that option in mind, I decided to just go ahead and load up the circus wagon leaving the hotel  by taxi at 6:45.

After arriving at the airport, the driver wanted $10 and I offered him $7 which is all I had in smaller bills…he of course pushed back and when I gave him a $20 all he had in change was $5000 won which exchanges to about $5…it was a $15 taxi ride, but well worth it given the amount of gear I carrying.  The language barrier is a constant issue from the hotel hostess, taxi drivers, bus ticket clerk…you name it!  After standing in line for my bus ticket to Gangreung, it was now my turn to make a best effort requesting my Gangreung and it was, of course, not going well until a young lady behind me stepped forwarded and cleared the air…I have found that all the Korean’s have been quite helpful to me during my short time in country.  The cost of the 4.5 hour trip was $26,800 won or about $25…can’t beat that especially since the bus is similar to tour buses you see in the US with large baggage departments below.

Passing through the countryside you see many rice farms, green houses and lush green forests with many mountains even with ski areas towards the east coast…similar to what you’d find in East Tennesse & Western North Carolina.  I was feeling a bit cocky by this time given I was well on my way ot Dong Hae…the cockiness was short-lived shortly ofter I rolled into Gangreung.  The scene was chaotic at the bus terminal with buses transitioning every few minutes and given I’m a bit weak reading Korean characters – believe I actually failed that class, things got interesting.

Being a large facility and carrying five, heavy bags, I just wasn’t quite mobile enough to scout the place out adequately…so I decided to lock my 4 largest bags together at the entrance to the termnal and set out to find out my next move.  As luck would have it, I saw and information booth and stepped inside only to discover both ladies understood little english; however, they made a phone call and after several discussions with a gentlemen on the other end of the line that spoke good english, it was best that I take another bus to Dong Hae.  Again, back on stage at the ticket counter with no one speaking english, and once again, a nice lady stepped forward to assist…the ticket for the hour ride was only $3400 won or about $3.25 USD…what a day of value!

The cockiness was starting to come back when I suddenly realized I had to move all the gear in multiple trips from a second floor platform to the lower level & with no carts in sight…one of the challenges of traveling solo.

Loaded and on to Dong Hae, I still had a nagging suspicion I might be on the wrong bus, but when we rolled into Dong Hae it was clearly marked on the terminal building…but wait, you guessed it – I sitll had to find a cab to make the trip to Hotel Lisa and as I’d faced a few times before, the cabs were lined up about 50 yards from where I unloaded…an do keep in mind, you are responsible for loading and unloading your own baggage on and off the bus.

I’m worn out again just reliving the moments as I type away on the this blog!!

After checking in to Hotel Lisa, I’ll tell you more about that in a later blog, I realized I hadn’t eaten all day and set out to find some reminder of home – and there beckoning me were those 3 letters – KFC…a chicken sandwich and orange Fanta and I was back!!