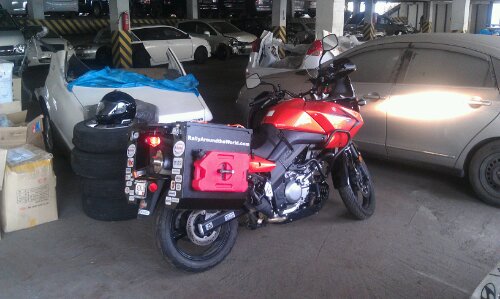 News Flash Finally found the hotel in Khabarvosk about midnight after an 11hr ride…tough pulling into a remote Russian city at that hour searching for the hotel. Believe me, there are no hotel signs or beacons in the night showing you the way.

After passing two Russian police officers along the side of the road, I decided go ask them if they could direct me to the Chiata Hotel; we were having a bit of a difficult time communicating, when one tapped on the car and pointed indicating for me to follow him. We went a couple of kilometers down the M60 Highway and they just pulled over pointing ahead. After riding further and finding nothing, I pulled into a gas station asking anyone that would listen, “Chiata Hotel” in my best Russian accent.

Finally a guy who spoke a little English, offered some help by calling a friend that spoke very good English. While explaining my desire to find the hotel, two ladies overheard and said just to follow them – they would lead me to the hotel. I absolutely would have never found the the hotel without their help…still be riding around by daybreak!

Woke up this morning quite early…about 4:30 am and I guess all the anticipation of starting the ride across Siberia got the best of me. Met Svetlana at the port terminal along with Julian & Lorena to get the bikes released from customs…took a bit longer than I had hoped since I needed to get on the road if I wanted to get to Khabarovsk at a reasonable time.

When I first cranked the bike, it would only run for a few seconds and die…just what I needed to start this day! I knew the fuel level was extremely low due to shipping requirements and I thought that may be the problem. As luck would have it, it started to run well after a few minutes and I followed Svetlana to the neairest gas station to fill up. I then headed back to the hotel to load the gear on the bike…pulled out of the hotel parking lot right about noon.

The trip out of Vladivostok was hectic with all the cars & traffic jams and with one-way streets it took awhile to reach the M60. For the first 20 miles or so, the roads were good.

Road conditions to Khabarovsk were treacherous at best…Tons of gravel, dust, pot holes and road workers became the theme of the day. It was the Alaska Highway on steroids and add all the traffic including the big trucks, it was a wild rodeo. During the entire trip, made just 2 quick fuel stops and ended the day with the bike, gear and myself covered in dust & grime.

The scenery reminded me early in the day of the Texas hill country and gradually changed to a look of Alaska….hope today to snap a few pictures.